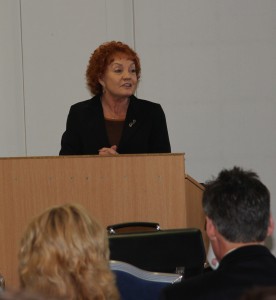 Marit Nybakk, Vice President of Stortinget and the coming President of the Nordic Council, wished the almost 80 participants from Canada, USA, Netherland, Finland, Sweden and Norway, welcome to the first International Alcohol Interlock Seminar in Norway October 25th 2012. She also announced that the Nordic Council on November 1st was due to make a resolution urging the Nordic Countries to start introducing alcohol interlocks in commercial vehicles.

In several countries of Europe the technology of Alcohol Interlocks, has found its way into vehicles used for transport of goods or passengers, as well as offender programmes. The alcohol interlock provides a quality assurance to comply with a company’s alcohol and drug policy as well as providing safety in traffic by halting offenders.

Since 2003, a European subcommittee of CENELEC has developed European Standards, guidelines and advisory documents for the use of alcohol interlocks. The Norwegian National Committee, NEK/NK BTTF 116-2 “Alcohol Interlocks for Motor Vehicles” was set up 2011 by NEK (Norwegian Electro technical Committee) to take part in this international work.

The members of the Committee represent the interests of approx. 400.000 Norwegian Commercial and Professional Drivers in the national and international work with alcohol interlocks.

Anne Marit Bjørnflaten, MP and Deputy Chairwoman of the Standing Committee of Transport and Communication, introduced the seminar.

Susanne Bratli, MP and representative of the Standing Committee of Transport and Communication in the Norwegian Parliament Stortinget, was the moderator of the Seminar.

The presenters were as follows:

World Wide use of Alcohol Interlocks to prevent drunk driving

Robyn Robertson_Worldwide use of interlocks to prevent drunk driving_Oslo Oct.2012_1

Programmes for Alcohol Interlocks in Europe

Alcohol Interlocks as a tool to abolish Drunk Driving

Legislation for Alcohol Interlocks in busses for School transportation

Legislation and guidelines for professional users of Alcohol Interlocks

Handling of drug and alcohol abuse in work environment

Use of Alcohol Interlock in Transport Vehicles.

The beginning of a new era in Norway.

The International Alcohol Interlock ushered in a new era regarding political support for the work with alcohol interlocks in Norway. Reports have been made. Tests have been performed. All points in the same direction: Driving under influence of alcohol takes a huge toll of human lives in traffic. Which was thoroughly documented by the presenters from different angles.

The correlation between driving under influence of alcohol and traffic deaths and injuries is established as a significant scientific fact. It remains to use the technology available to end the regime of drunk drivers.

Geir Kvam from the the Norwegian Unions of Transport Workers declared their support for the introduction of Alcohol Interlocks, and requested at joint effort by the Government, the Employers and the Unions for the further work with the issue. 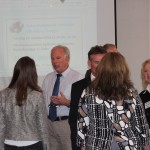 Bjarne Eikefjord, leader of the National Committeee “Alcohol Interlocks for Motor Vehicles” urged the Norwegian authorities, politicians, organizations, public services, transport customers and all others who want freedom from alcohol, narcotics and drugs in the traffic, to unite in a joint effort to expand the use of alcohol interlocks to bring Norway on line with the other countries in Europe.

Susanne Bratli, MP and moderator, responded to the urge by inviting the National Committee to take part in the political follow-up from the seminar by the Parliament Stortinget. She declared it a public and political responsibility to end the fear caused by drivers under influence of alcohol.